In Thailand, “Rethinking Plastics” teamed up with Kasetsart University and the fishing community of Ban Nai Thung in Nakhon Si Thammarat to strengthening marine debris management on small-scaled fishing vessels and in fishing communities as part of the efforts to find solutions to reduce marine plastic waste.

At the beginning of this year, the fishers were invited to note the amount of lost gear as well as plastics brought on ships so that Kasetsart University has reliable data to develop recommendations and guidelines. In March, a training and exchange with more than 20 fishers on location took place to share more about improving plastic waste management as well as to learn about the efforts and challenges of the communities. At the end of May, “Rethinking Plastics” and the Environmental Justice Foundation (EJF) then hosted an online “Fisheries Debris Management Workshop” on lessons learned and solutions from Thailand, as well as the region, Japan and Europe. As a next step, Kasetsart University continues to evaluate the data and will return to the community to discuss further solutions and findings from their research.

On the occasion of today’s World Oceans Day, follow us on a trip to Nakhon Si Thammarat and hear the voices of the fishing community:

On 26 March, the ‘Rethining Plastics’ team, along with educators from the Faculty of Fisheries of, Kasetsart University visited Ban Nai Thung subdistrict, Tha Sala District, Nakhon Si Thammarat to follow up on activities to spread knowledge about plastic waste management for fishermen and to learn from their routines to reduce plastic waste leakage into the ocean. 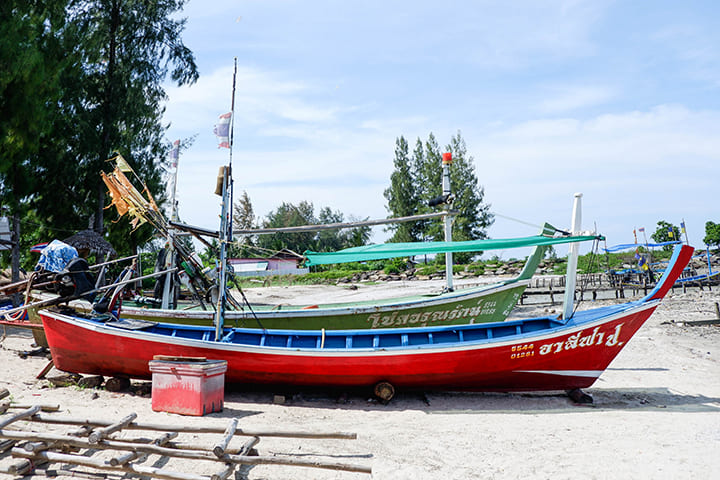 The team arrived at the coastal village of Ban Nai Thung early in the morning but that did not escape the unsparing heat of March. The villagers had chosen a small 2-story pavilion on the beach as their meeting place, next to few fishing boats being tied up along the beach. There was excitement in the air as the professors from Kasetsart University, who had come to survey the fishers’ plastic usage two months ago, were returning to share their knowledge on waste management with the community. An announcement boomed from the loudspeakers: The fishers lined up to join the workshop, still engaged in their morning chats. Some had just returned from fishing at 4.00 am in the morning.

"Short mackerels are now back after a long time," a fisherman’s voice was heard. 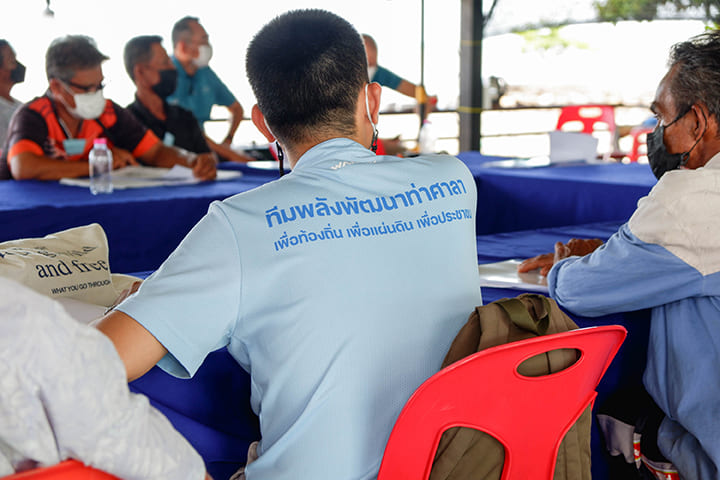 While the workshop went on cheerfully from late morning to the afternoon, hearing the details from the workshop, one might recall the data from a 2015 study by the Thai Department of Marine and Coastal Resources, which shows that ​​more than 80% of marine plastic litter originates on land.

Imagine Pak Phanang District, Nakhon Si Thammarat, which is located on an estuary and known for delicious food. Pak Phanang River runs for hundreds of kilometers, branching out all the way to Phatthalung. In addition to being an abundant source of seafood, it also conveys thousands pieces of plastic waste per day to the ocean. Once out there, they are no longer bound by borders, like this little visitor from Thailand in Maldives.

As coastal residents, the fishers are forced to deal with beach litter from unknown origins daily. Their traditional fishing activities may also contribute to plastic waste. And how much waste do their plastic-ridden lives at the coast add to the marine litter, if at all?

"Apart from commercial fishing whose environmental impacts are monitored by the Department of Fisheries and various organizations, as fishing vessels of all sizes are out at sea around the clock, we would like to pay attention to traditional fishing as well. Because even though these fishers use small fishing boats, they go fishing frequently and live by the sea. In Thailand, there are about 3,600 coastal fishing villages just like this one."

explained Asst. Prof. Dr. Methee Kaewnern from the Faculty of Fisheries at Kasetsart Universitycurrently cooperating with the “Rethinking Plastics” project on debris management from small-scale fishing activities and communities. The professor said that this village was chosen for being among the most cooperative and motivated communities, with a previous collaboration with the Department of Fisheries. A few weeks before, the Kasetsart team had handed out notebooks to the fishers to write down the numbers of items brought on board their boats that may be littered, including lunch items, water bottles, energy drink bottles. In addition, they were asked to note the numbers of fishing nets and counting those lost in the sea. During two months, eight fishermen had lost a total of 14 fishing nets in the sea. 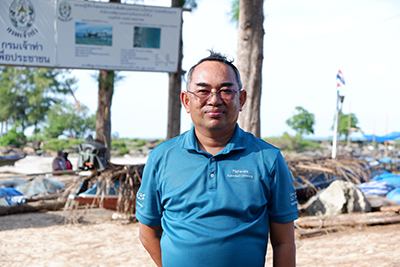 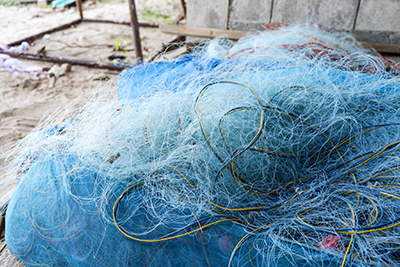 Why is it necessary to keep count of lost fishing nets?

Because abandoned fishing gear, intentionally dropped or lost by accident, leads to a new problem that is being discussed: ghost nets, which are made out of plastic fibres and other gear. Marine animals can get trapped in it and die. A tool such as a shrimp trap, if left in the ocean, can trap animals that wander in. With small fish trapped inside, it will attract big fish, causing a chain of death.

"The sea is not a trash can. Villagers here don’t just throw their net into the water unless it gets stuck to trash, stump, or ship debris underwater. The sea is our livelihood. I always ask people if they would eat stuff fished out from the trash.” Charoen Toitae, the community leader, shared his thoughts after the workshop. Mu has been a fisherman for more than 40 years. Growing up with it, he has seen the sea struggling with plastic waste pollution that is plaguing the whole world. Mu is the community’s key coordinator in various occasions, such as community food processingand fundraising to equip fishing boats with solar panels. He also represents the community in working with governmental organizations. "When I was small, we didn’t need tools to catch crabs. We sometimes stepped on one while swimming. There was also water spinach on the beach that we would use to lure crabs out of their holes, then we got our crab dinner. Lately there started to be more (fishing) ships with advanced gear. Marine animals are caught faster than they can grow, so we villagers started to look for a solution ourselves." 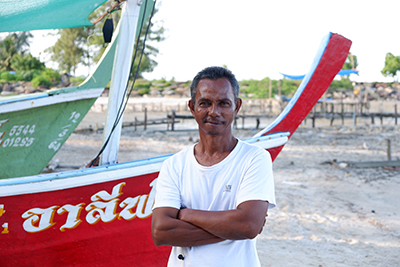 "Fishermen don't throw trash into the ocean. They’ll just get stuck in our nets and gear. In strong currents they can tangle up pretty badly.” Phanak Pandit, boatmaker and fisherman, said with a thick Southern Thai accent after the workshop. He had just caught 100 kilograms of short mackerels with a gillnet the night before. 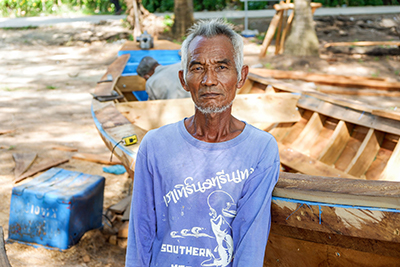 If fishing tools littering is not a problem here, then what about waste management of this coastal community`?

Knowledge on how to improve waste management and reduce the effects of plastic litter is still limited, not only in fishing communities but also in big cities. Therefore, the training served to strengthen knowledge on ways to manage and dispose marine debris within the community and onboard. A key learning was that a better collection, sorting and recycling will never solve the problem alone unless waste production and consumption are reduced first.

"The villagers get together to collect litter on Eid al-Fitr and on December 5th of every year. The SAO (Subdistrict Administrative Organization) lends us containers and sometimes sends a truck to pick them up, but it's never enough. The trash in our village just keeps increasing. People today are all about convenience. You end up with trash just by buying yourself a meal." Anan Yiko, a fisherman, voiced his view on the community’s production and management of waste. The villagers said that he goes out to clean the beach every morning. 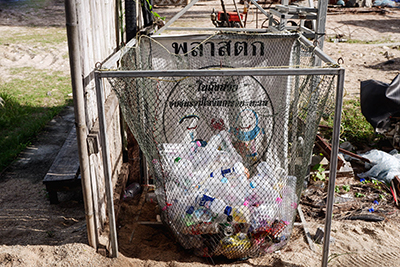 Reducing plastic waste is not just about collecting, sorting and recycling but also about behavior changes that require long and continuous work. Mu, the community leader, shared that they had already made a big improvement.

When asked "How do you want organizations to help solve the plastic waste problem?" Kato Toitae, a cook said: "I once proposed to the SAO that I’d like them to help teach the villagers about trash more often. Sometimes people don’t listen when it’s just us volunteering housewives talking. They just nod and then ignore what we say. This happens everywhere. So in the meantime, we start by teaching our children because we can." 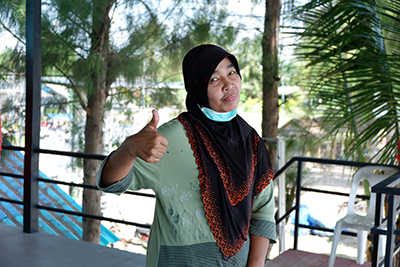 Her comment is interesting as it alignes with Prof. Methee’s opinion. When asked about the future and expectations for the activities, he replied that every project has its duration. Although the Ban Nai Thung community may have more awareness than others, it’s up to them to continue the efforts.

Just like how Kato put it, "When we can't change other people, we start with ourselves and teach our children in the meantime."