Home | Pilot Project | Tangled: An exhibition about the effects of marine litter on the environment

Tangled: An exhibition about the effects of marine litter on the environment

“Every year I go back home to Sathing Phra district in Songkhla province,” recounts Narongyot Thongyu, a Thai contemporary artist. “I go to the beach to pick up trash. Seeing the beach covered in plastic waste makes me wonder what it must be like out in the oceans.”

Thongyu uses marine litter, discarded fishing gear and scraps to create artistic representations of sea turtles that are killed when they become entangled in ghost fishing nets on the ocean bed. Along with three other artists, he worked with the Rethinking Plastics project, the Love Wildlife Foundation and the Environmental Justice Foundation on an art exhibition in Bangkok. The exhibition told the story of plastic pollution, its impact on marine wildlife and the path towards solutions. With their installations and photographs, the artists inspired people to think about their plastic consumption and reduce single-use plastics. The project also used educational activities to showcase and share vital information on plastic pollution. For Thongyu, the work was a

“collaboration between artists and environmentalists. We are all part of society, and we can all do our part to help raise awareness and make positive changes.”

AND THIS IS WHAT HAPPENED IN DETAIL:

Dive underwater in the middle of Bangkok

As part of our campaign, we co-organised an art exhibition called “Tangled: ติด - ร่าง - แห” to highlight the devastating impacts of marine plastic and provoke conversations around marine litter – one of the greatest threats to the environment and biodiversity worldwide. In the space of two and half weeks, around 12,500 people visited the exhibition. It had a number of zones including a series of beautiful images of sea life, the dramatic impact of plastic, installations showing the reality of marine plastics and overfishing, and information on what people can do to change this reality. The exhibition featured four Thai artists whose work was inspired by environmental issues. They used marine plastic waste to create installations and exhibited underwater photographs highlighting the impacts of ghost fishing gear and plastic on our ocean and marine wildlife. The exhibition took place in February 2022 in the Bangkok Art and Culture Centre, and its opening was attended by the EU Ambassador to Thailand, the German and Norwegian ambassadors, a representative of the Thai Ministry of Natural Resources and Environment and several Thai opinion leaders engaged in environmental topics. Many visitors attended accompanying talks and presentations on marine wildlife and plastic pollution, and people who weren’t able to visit in person could read about the exhibition in over 40 articles published on social media. A virtual tour of the exhibition is still available online, and the Love Wildlife Foundation will keep on using the information developed, such as an interactive story about a ghost net.

In preparing the art exhibition, the research team of Love Wildlife Foundation collected data on marine life as well as debris found in and around the Koh Mun islands in Rayong province. This included 90 metres of rope and 100 m2 of fishing net, which were removed from reefs. Many different kinds of coral and animals get entangled in discarded fishing gear. Renowned National Geographic wildlife and environmental photographer Sirachai Arunrugstichai took photos of the debris, the impacted wildlife and the removal process, and this photo documentation was also displayed as part of the exhibition.

Over the course of six months, we trained over 30 people to collect data about the impact of discarded fishing gear. Two Thai students also received a 6-month-training as conservation dive instructors and plastic waste educators. More than 200 local and international school children, students and teachers joined our activities as part of educational trips. They learned about the impacts of waste on the environment by witnessing marine plastic pollution first-hand. And they also became empowered: by participating in data collection and beach clean-ups, they saw how they could make a difference and reuse, recycle and repurpose waste. Working with them and other volunteers, we removed 190 kg of plastic and debris from the marine environment and beaches. All collected litter was sorted, weighed and recorded before being recycled, reused or sent for disposal.

Follow the full story of Mimi, the ghost net here: 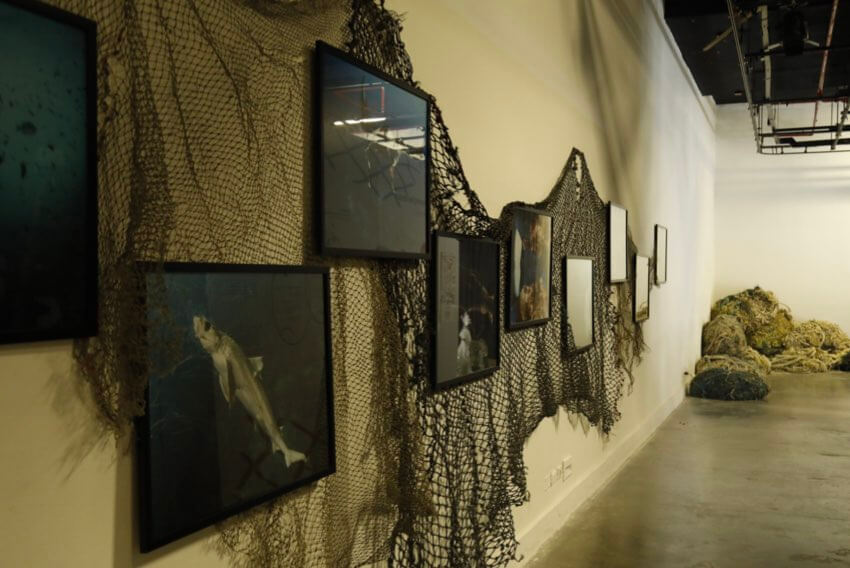 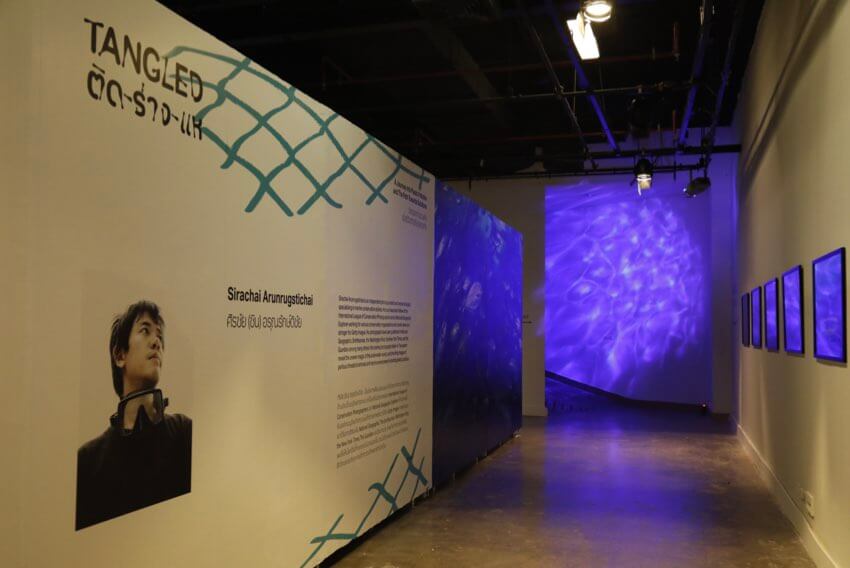 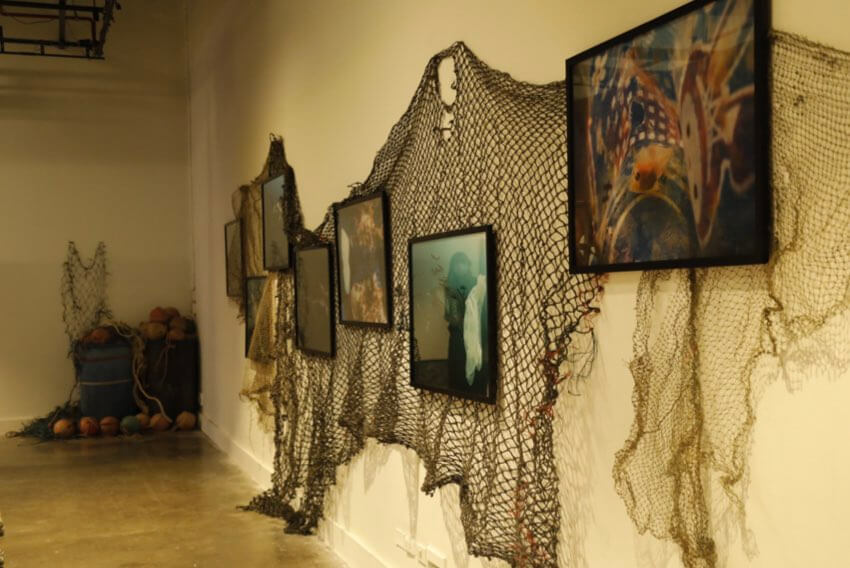 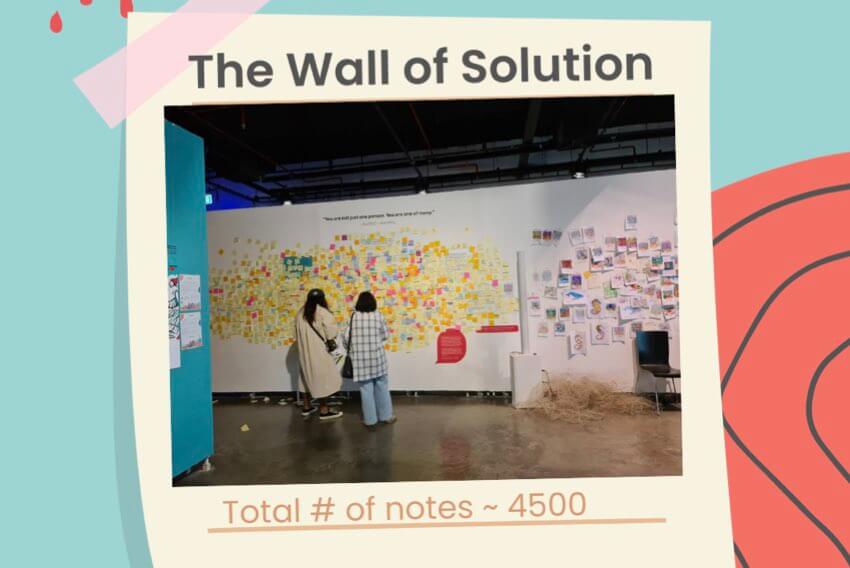 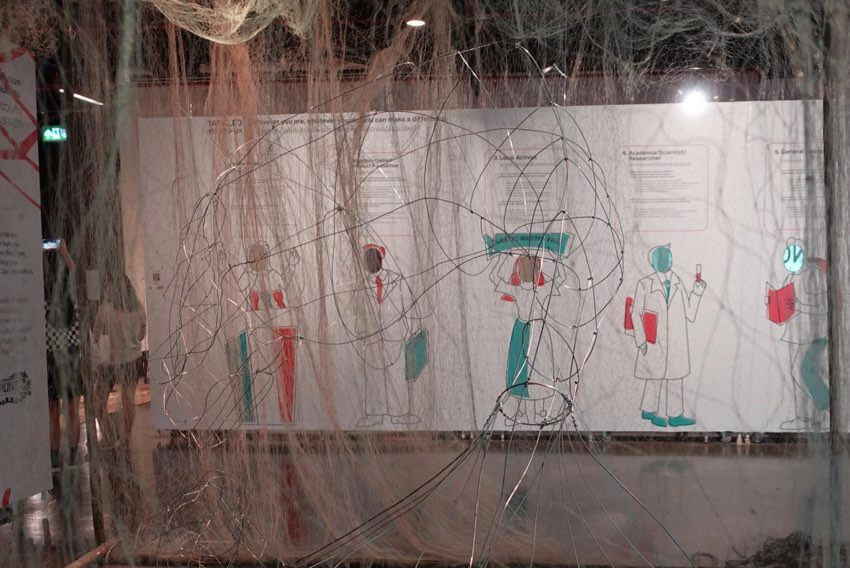 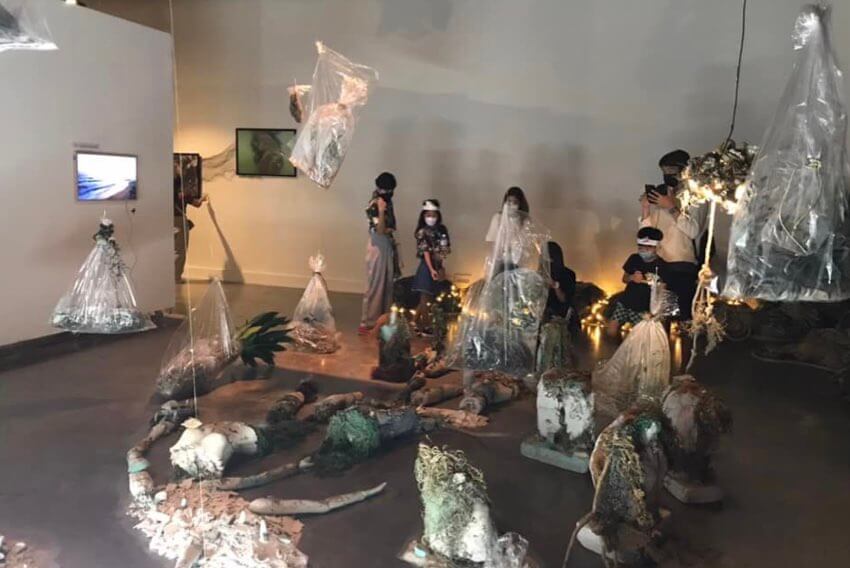 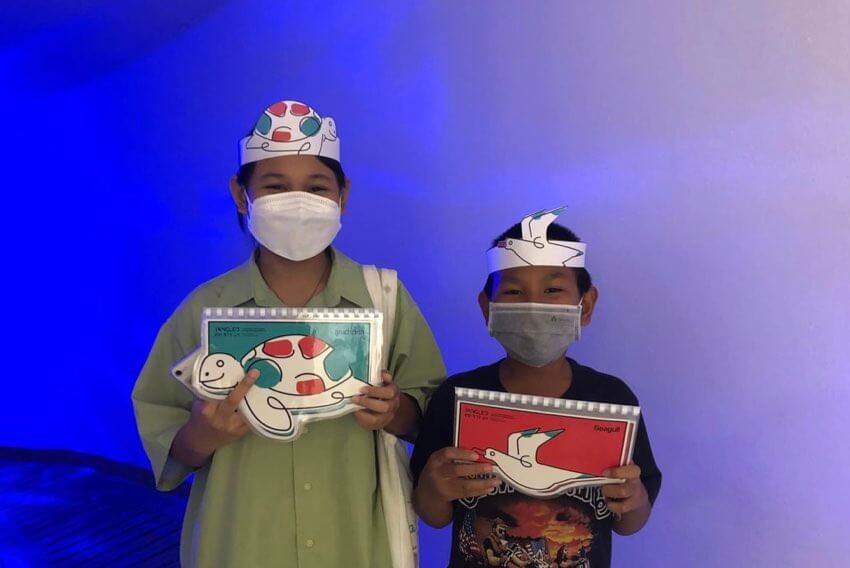 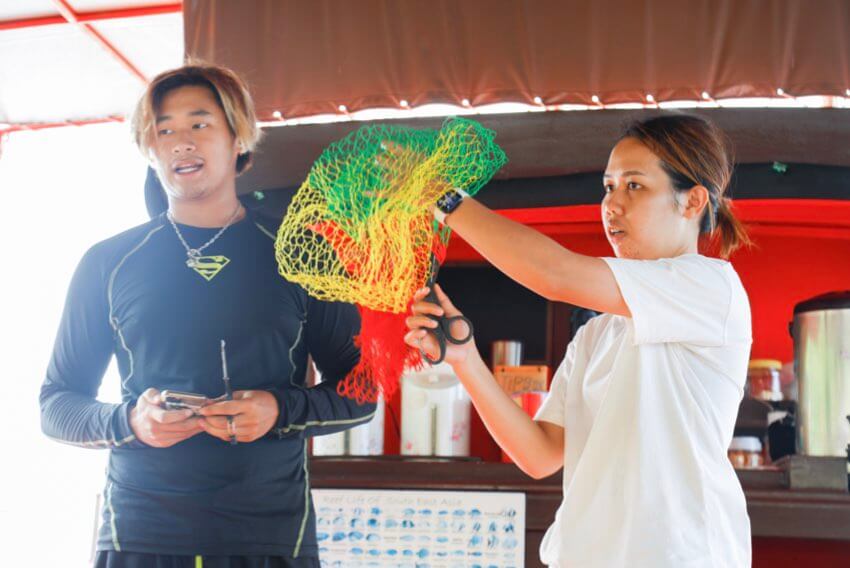 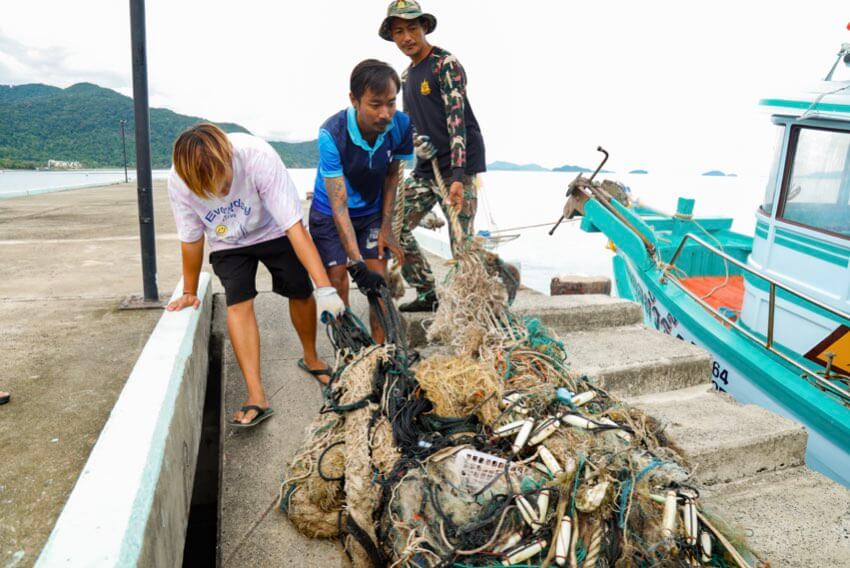 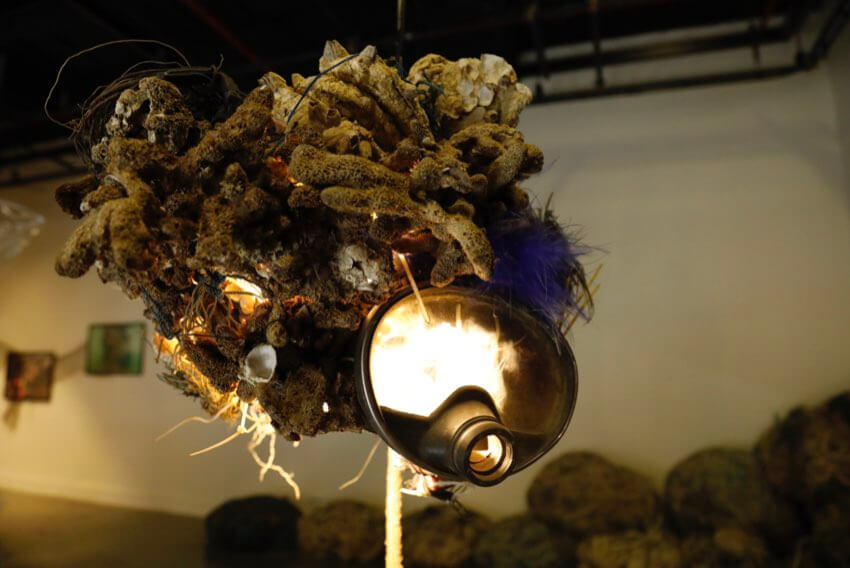 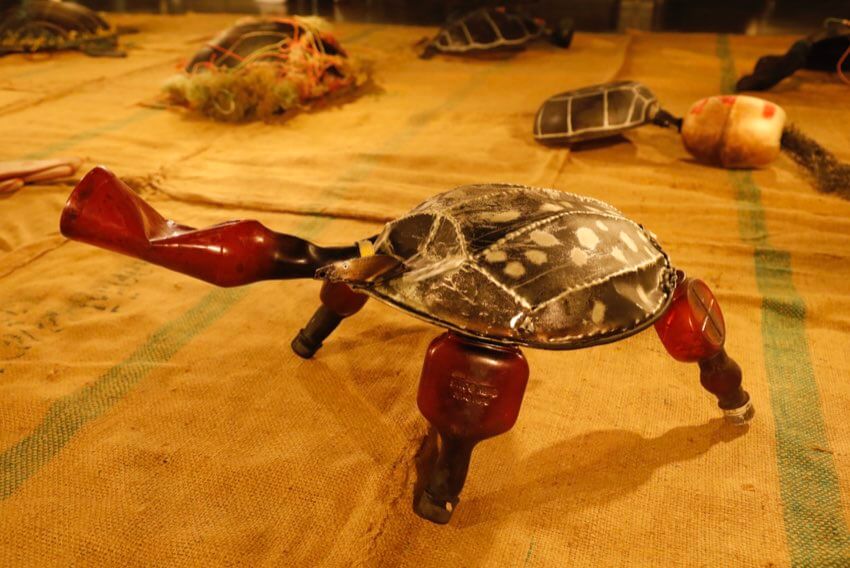 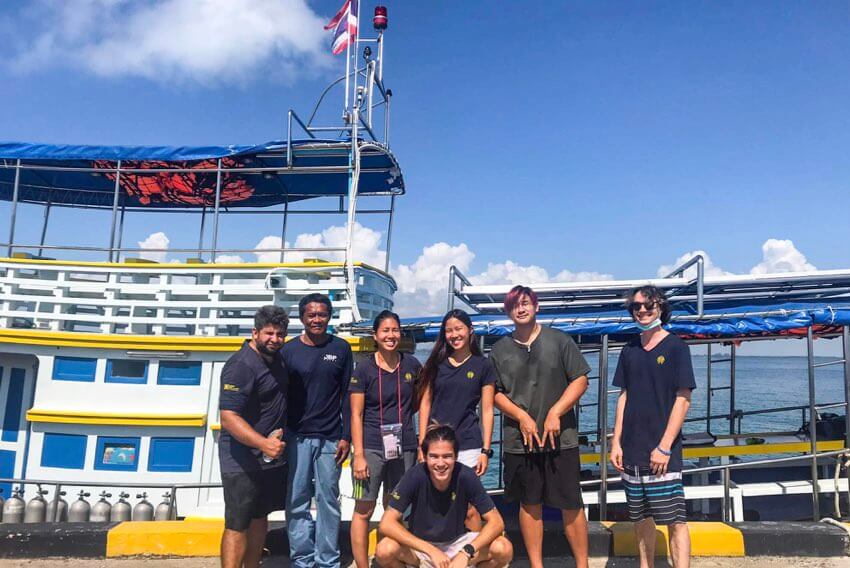 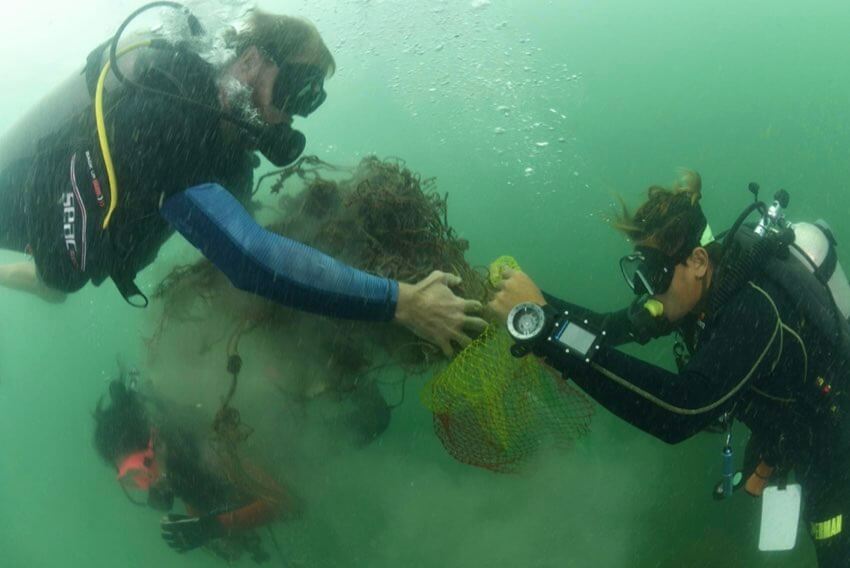